Admitted students will have to strictly follow the rules & regulations laid down by the College. Violation of rules or instructions will be recorded in the Identity Card and College Record as warning. After third recorded violation the College reserves the right to terminate / expel the student from College at any stage. Following Rules should be remembered and followed :

2. MOBILE : Use of Cell Phone / Mobile inside the College Building is not allowed. If any student is found using mobile phones inside the Class Room, Corridor or office of the College, her phone will be seized followed by other disciplinary action which may lead to CLC .

3. ATTENDANCE : All students will have to attend minimum 75 % classes in all Semesters. Students below 75 % attendance will not be allowed to fill up the Examination Form or appear for the End Sem. Examination.

4. LEAVE IN EMERGENCY : If the student is unable to attend the classes for more than five days due to her illness, marriage, illness in family, any problem in family , participation in Sports competitions outside the state or any other reason then she can write / send an application to the Professor-in-Charge or Principal or Teacher through registered Post or by any person for condoning short attendance. In such cases only her shortage of attendance can be made up by extra classes otherwise she will not be allowed to fill up the Examination Form.

5. SUBJECT CHANGE : No student will be allowed to change her combination of Subjects after submission of Examination Forms of Mid. sem. of First Semester.

8. NOTICE BOARD : Every student will have to develop the habit of watching College Notice Board every time she enters the College and leaves the College.

9. ORNAMENT / JEWELLERY : No student is permitted to put on ornaments or jewellery.

10. LOITER AROUND : Students should not loiter around Principal’s Chamber / Building Corridors/ in front of class rooms without any reason .

11. SITTING ON VEHICLES : Students should not sit on any vehicle parked in the Campus. o one should use any parked vehicle as Table to write anything. If found guilty the student may be fined Rs.50/- .

12. MALE MEMBER : These days it is found that students invite male members of the family or male friends to the college campus. If any student is seen talking for a long time after she has been dropped in the college Campus, this will be reported to her Parents with a fine of Rs. 100/-.

13. SHOPPING DURING COLLEGE HOURS : Students are warned not to bunk Classes and move around nearby shops or malls during College Hours. If any one is found doing so she will be taken to task.

14. REGISTRATION FOR COLLEGE LIBRARY : Students are directed to get their names registered in the college library within one month after admission. A student can borrow two books from the library at a time after due record in the Identity Card. No student is allowed to enter the library without her Identity Card. The personal belongings brought inside the library will be seized. Students can avail the facility of reprography (Xerox) on payment of 50 paise per page in the library itself and the Book Bank. Poor Students will be issued two books @ 5/- only for three months continuously. Students can read magazines, books and papers in the Reading Room of the library during prescribed hours notified on the Notice Board of the library. But if the books are not returned by the due date a fine of 50 Paise par day will be charged for each book. In case of loss of books the student will have to submit the same book of the same edition or latest edition in the library at the due time of returning the book. If the student does not return the book or fails to submit the lost book on time, she will have to pay the cost of that book thrice the price.

15. BAN ON RAGGING : Ragging is banned in the College. This College is reputed for excellent teaching and strict discipline. It has formed a Proctorial Board that looks after proper maintenance of discipline and leaves no scope for ragging and unruly conduct. Anybody found involved in any kind of misbehavior leading to ragging will be expelled from the college after the decision of the Proctorial Board. Besides, FIR will be lodged against those students who will be found exercising ragging and bullying on the campus or around the campus.

Any disorderly conduct either by words (spoken or written) or by any act which has the effect of teasing, ill treating or handling with rudeness, causing harm, fear or apprehension or asking any student to perform any such act which may put a fresher to shame or embarrassment or adversely affect the physique or psyche of the fresher is considered as ragging.

Depending upon the nature and gravity of the offence as established by the Proctorial Board of the college, the possible punishment for those found guilty of ragging at the institution level shall be any one or any combination of the following : Punishment at the Institution level for Ragging

(i) Cancellation of admission

(iv) Debarring from appearing in any test examination or being evaluated

(vii) Rustication from the institution for a certain period .

(ix) Expulsion from the institution and consequent debarring from the admission to any other institution.

So all students are strictly warned against ragging. Ragging is, now, a crime. No one can feign ignorance of the law. In pursuance of the directions/decisions of Hon’ble Supreme Court of India, those who indulge in ragging can be punished with :

(a) Jail for period ranging from Six months to Ten years.

(c) Embossing of certificates that ‘The student had indulged in to ragging’ which will :

- Adversely affect opportunities to go abroad for the students on whose certificates it would embossed that he/she had indulged in to ragging as a result they will not get passport and Visa.

All students and their Parents will have to undertake the following oath against ragging at the time of admission by filling the form against ragging. 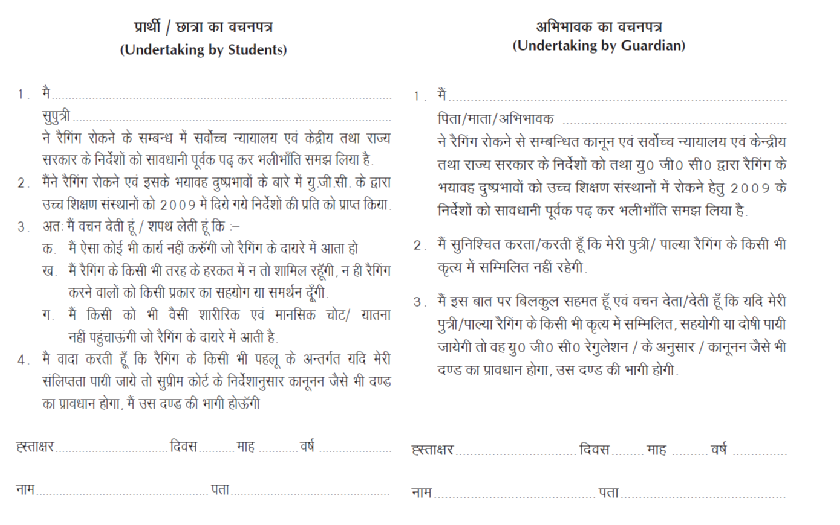